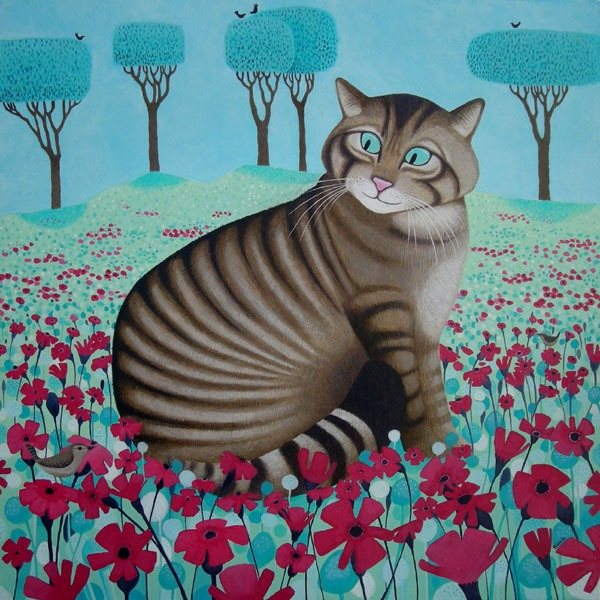 The SWA team were struck by the painting’s personality and colour. Subsequently, Ailsa generously offered to donate a percentage of the sales from her wildcat greeting card packs and prints to support the work of SWA.

The Scottish Wildcat (Felis silvestris) is our only remaining native cat and one of our most endangered mammals. Following habitat loss and persecution through the 19th century, we need to act to save shrinking populations in the wild. In the UK, the wildcat is now only found in the Scottish Highlands north of the central belt. Today the wildcat faces the additional threat of hybridisation with domestic cats, which can also pass on diseases to wildcats.

Ailsa commented on her decision to support Scottish Wildcat Action and its aim to save the Scottish wildcat.

She said: “I am delighted to be working with Scottish Wildcat Action to help support our iconic Highland tigers, which teeter on the brink of extinction.

“I have also supported Scottish badgers and have worked in the past with RSPB so nature conservation and wildlife are very close to my heart. If I can help in some small way through my art, to highlight the plight of the Scottish wildcat, then that is fantastic.”

Dr Roo Campbell, the priorities area manager for SWA, said: “When we first saw Ailsa’s painting of the Scottish wildcat we all loved it.

“It is brilliant that Ailsa has offered to support the project by highlighting the perilous position the Scottish wildcat finds itself in and we are so grateful she has decided to go even further and donate to the project through sales from her wildcat cards.”

SWA is a partnership led by Scottish Natural Heritage (SNH) and involving more than 20 organisations. Its five year project aims to save the critically endangered Scottish wildcat from extinction and is working to protect the species in five Wildcat Priority Areas :

The SWA project is funded by the Heritage Lottery Fund and involves more than 20 organisations including:

Ailsa Black’s distinctive images are probably familiar to anyone who has been in a gift shop or gallery in Scotland. Ailsa studied Graphic Design and Illustration at Gray’s School of Art in Aberdeen. Today she works from a seaside studio in the tiny Scottish village of Carsethorn in Dumfries and Galloway.

Ailsa has exhibited at the Royal Glasgow Institute and Paisley Art Institute. In 2017 she was listed as one of 25 top UK influentail art brands to watch by a panel of over 200 retailers and business people by Licensing Biz.

Her website address is www.ailsablack.com and her Scottish wildcat picture is available in a number of formats, including greetings card packs and prints.