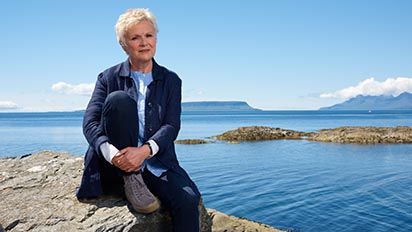 One of the country’s best loved actors, Julie Walters, presented a four-part series in which she travels the most beautiful and interesting stretches of coastal railway routes in the UK. The first programme was all about The West Highlands and was shown in November 2017 on Channel 4 but you can still watch it on All4 (link at the end of this post). Julie travels by train for a “magical mystery tour around our shores, getting lost in dramatic landscapes, uncovering surprising historical secrets and discovering how life really can be a beach!” Read on for an interview with Julie about the West Highland Railway.

Julie travels on the West Highland Railway in Scotland on board the famous Jacobite steam train, famous for its starring role in the Harry Potter films, before getting some practical training in “extreme violence” and blowing up railway lines at Arisaig House – home to the Special Operations Executive that trained agents in the WW2.

In Mallaig, once the biggest herring port in Europe, Julie learns herring gutting and smoking. She then catches the ferry to the Isle of Skye where she meets one of the last ‘seanchai’ or traditional Scottish storytellers.

At Kyle of Lochalsh she catches the Inverness bound train stopping at Duirinish, one of the remotest communities in the Western Highlands, where she works with the Highland cattle and their wrangler, the redoubtable Morag, who takes her into the bosom of the hamlet. Your new series is Coastal Railways – what’s it all about?

In the series I’m going on a journey around Britain, specifically the coastal parts of Britain, by train. Although I love holidaying in the UK, I feel as though I haven’t explored it enough. It was a way of exploring the coastal communities that are built around the railway. I do think very romantically of the railways. There is such a diverse range of people who make their lives in these communities. It’s not just people who work in rail yards, but it’s all kinds of people in farms and factories and tourism.

Why did you want to make the show?

I love meeting people, I’m really curious about other people, which I think is part of being an actor. From meeting these people on these journeys, zipping around the country on these picture perfect railways, I’ve discovered so much about the way that the coast operates and the people who keep things going. It’s been a wonderful experience.

The show’s about coastal railways (the clue is in the title). Are you a fan of the seaside, trains, or both?

I’m romantic about trains. I remember steam trains from when I was a small child. I can remember being on Snow Hill station in Birmingham and I just have one image of all the steam and the sound and the smell and waiting for my aunt to get off the train and how exciting it all was. I’ve had one or two trips on the train that I’ve just loved. Overnight from Euston to Fort William, which was just gorgeous, and then another down the East Coast of Scotland and it’s just beautiful. But I also love British seaside resorts, no matter what the season. I just love the feel of them because that’s where I went as a child. We’d go to the coast in the summer for family holidays. I didn’t experience the seaside resorts out-of-season until I was older. It’s filled with tourists in the summer, but stripped back in the winter. It’s windswept and rainy. It feels more like it’s just the sea and the small communities of people who live there, and I love that side of it too.

Where did you travel to for the series? In the first episode you’re in Scotland.

I take a trip along the West Highland Line; we went on the Jacobite train, which is of course the Harry Potter train. I was denied that experience when I was doing the films! It was so beautiful along that line. I’d been to the Highlands before but this was a wonderful way to experience that journey. I went to the Arisaig Estate, which is a gorgeous country house surrounded by woodland. In the Second World War the secret service trained young men and women there to be special operatives. In the programme I do a bit of training of my own there with a retired major, Major Brent, which was very good fun. He was surprisingly polite and talked like Richard E Grant! I go along from there to Mallaig, where I meet with a fish merchant, Andy, who shows me how his business works. Then I went on to the Isle of Skye, which I’d never been to, and then up to a little settlement called Duirnish, which was so peaceful, and met a crofter Morag and her cattle grazing all around the village.

You got to ride on the real life Hogwarts Express – what was that like?

It was beautiful. It’s a beautiful train inside and out and a stunning journey. The scenery! Oh my god, it was so gorgeous! There’s the amazing crossing of Glenfinnan Viaduct, which is the one you see in the shot of the Hogwarts Express in the film. Before we set off, I went up to the footplate and had a bacon roll that they made with bacon they’d cooked on a shovel over the coals in the engine. I’d heard about it happening on old steam trains, but I’d never seen it. That was a nice treat!

It’s a popular line with Harry Potter fans – were they surprised to see Mrs Weasley on board?

There were a lot of people dressed in costume along the way, which was lovely to see. One or two people wanted their photos taken, but we were mainly kept separate so that we could film, as the train was moving of course, so we only had a finite time to shoot what was needed. But just being there it did make me feel proud to have been part of the films that reinvigorated interest in this beautiful steam line.

Have you done any factual television before?

I have, years and years ago. I can’t even remember what it was! In the 1980s. It was something about a community centre on a housing estate in Liverpool in 1982 or something. And I did do Julie Walters is an Alien where I did different jobs in the States and that was back in the 90s.

Does it feel odd, making a series where you are yourself in front of the camera? Is it easier or more difficult than being in character?

It’s both, I suppose. There’s no script so you just have to get into the subject matter, and remember what the producer wants for you to ask while also engaging with the person who you’re talking to and ask your own questions, and I really enjoyed it. I love meeting people. With acting it depends a lot on the role and the script is a completely different thing to interpret. It felt like a relief sometimes to not have a script and just to converse with someone and making someone feel comfortable. With acting you normally know what the other person’s about to say. Sometimes it’s nice to meet the actor before you’re filming on set but other times, depending on the role, it’s useful not to. If the character you’re playing is in a scene where they’ve not met the other person it can sometimes be helpful if you’ve not really met the other actor.

We’re often quite down on ourselves, as a nation. Did making this programme give you a certain pride in the country?

I did feel proud. All of these diverse people, all really interesting and with their own interests and passions. And love. They were great people and when you meet a lot of great people you do feel proud. There is a ‘British’ personality, or humour perhaps, but within that everybody is just incredibly individual and finding out more about that individuality is what was quite interesting for me on these journeys.

You’re a natural presenter. Do you now wonder what might have been if you’d not wasted all those years trying to break into acting?

I think I could have made a fist of it, but I think it would have made acting very difficult to do. Your personality is there and it would possibly make it difficult for people to see into the character you’re playing if you’re constantly on the television, so I wouldn’t want to do too much of the documentaries thing. But this series has been great fun to film, and it has been really lovely meeting so many different interesting people with a love of what they do.

The programme is still available on demand on Channel 4’s All4 website.