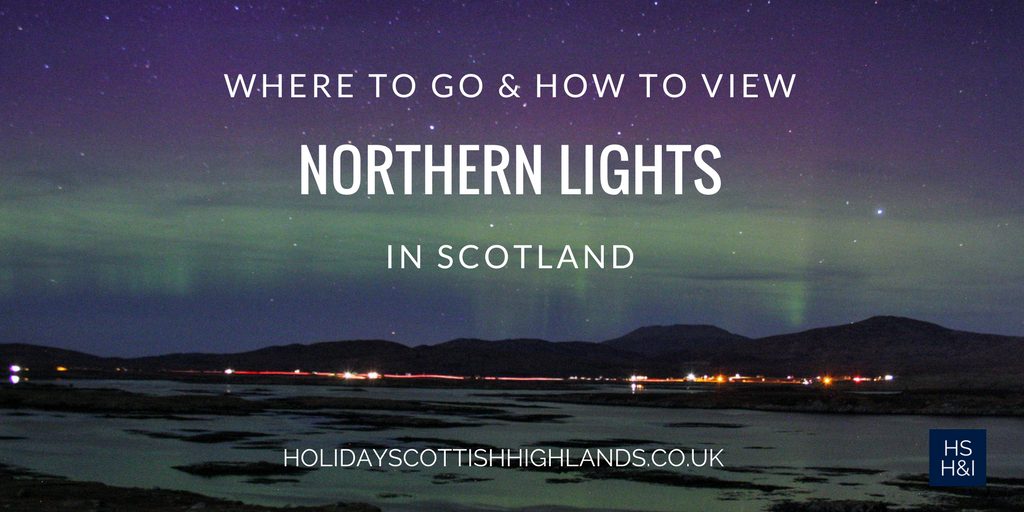 Read our top tips on how to view the Northern Lights and then take a holiday to Scotland to see this breath-taking natural spectacle.

What time of year is best to see the Northern Lights in Scotland?

The best time of year to see the Northern Lights in Scotland is the autumn and winter months when the nights are longer and darker. They don’t appear on set dates each year and are only visible in dark skies.

We saw them in September in 2015, 2017 and 2019. Locals said that was quite early as normally they wouldn’t see them until October.

Can you see the Northern Lights in the summer?

During the summer months it’s virtually impossible to see the Northern Lights because summer nights are very light in the north of Scotland (and the rest of the aurora-watching places). The Northern Lights can happen at any time of year but you need dark skies to see them.

Best months to see the Northern Lights in Scotland

A clear, dark winter night can give you breath-taking views of this display. There can be up to 18 hours of darkness in winter so as a general guide, we recommend the following months:

We don’t suggest you plan a holiday to see the Northern Lights in the months of:

There is still a chance you may see the aurora if it’s dark enough at night during the spring or autumn. But if your main aim is to see them, you’re best to avoid these months. If you visit Scotland in August, you’ll find it’s only truly dark for several hours. This means you have almost no chance of seeing the Northern Lights in August in Scotland.

How often do you see the Northern Lights in Scotland?

There is no easy answer to this question as it depends on factors such as the right solar conditions, clear skies and it needs to be in the autumn or winter.

Best places to see the Northern Lights in Scotland

Usually, it’s the north of the UK which gives you the best chance of seeing the “mirrie dancers”. This is why Scotland’s Highlands and Islands are such a great place to stay to see the Northern Lights. Spending your holiday as far north as you can, could increase your chances too.

You don’t need to go on a special “Northern Lights holiday” in Scotland. We’ve seen them just from the garden or window of the holiday cottages we’ve been staying in.

This means there are potentially lots of chances to see them. We recommend booking your accommodation in a remote area of Scotland with little or no light pollution so you might be able to see the Northern Lights from where you’re staying. It’s also important to remember that there’s no guarantee of seeing them so choose a destination that interests you in other ways too.

Some of the best places to see the Northern Lights in Scotland’s Highlands and Islands are:

The Outer Hebrides is a fantastic place to see the Northern Lights in Scotland and I’ve been fortunate to see them several times whilst on holiday on North Uist. This island chain has little light pollution so take your pick from Lewis, Harris, South Uist, North Uist, Benbecula, Barra and Eriskay.

See places to stay on the Outer Hebrides

There are 9 Dark Skye discovery sites on Skye so you’re spoilt for choice when it comes to finding somewhere without light pollution.

See places to stay on the Isle of Skye

The Isle of Coll is proud to be a Dark Sky Island. The Coll community has rejected the introduction of street lighting making it one of the best places to observe for star-gazing and aurora-watching.

See places to stay on the Isle of Mull

As the most northerly part of the mainland, Sutherland and Caithness are a good place to stay to increase your chance.

See places to stay in Caithness and Sutherland

Orkney is off the north coast of Scotland so another good place for Northern Light hunting. Try setting up watch on the beach at Dingieshowe, the coast at Birsay, or the top of Wideford Hill.

See places to stay on Orkney

The area of Moray is one of the more southerly areas where you might have a good chance of seeing the Northern Lights in Scotland. Moray’s Astronomy Club, Sigma, sometimes runs public aurora watching sessions.

See places to stay in Moray

See places to stay in the Cairngorms and Aviemore

It’s possible to see the Northern Lights from Fort William even though it’s a busy town with street lights.

See places to stay in Fort William and Lochaber

The islands of Shetland are the most northerly part of the British Isles so they are a good place to see the Northern Lights. Avoid places with street lights, such as Lerwick, as this can reduce your chances.

In Shetland they call the Northern Lights the “mirrie dancers” which is a perfect name for these dancing ribbons of light.

See places to stay on Shetland

Check out our directory for some stunning holiday accommodation in the Scottish Highlands & Islands to see the Northern Lights. 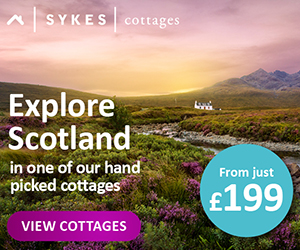 See: 15 stunning photos of the Northern Lights in Scotland

For a Northern Lights forecast in the UK, there is AuroraWatch UK, part of Lancaster University, which provides free alerts when the aurora borealis may be visible from the UK including Scotland’s Highlands and Islands. I use their free smartphone app. AuroraWatch UK share it’s data so you can monitor geomagnetic activity in real time.

If you want to know whether you’ll see the Northern Lights in Scotland or the UK tonight, check out the latest info below which is direct from the AuroraWatch website.

Please remember that the Northern Lights are unpredictable and even if they are forecast, you may not see them.

It needs to be a night with increased solar activity – we list some ways to find out when the Northern Lights may be seen below.

It needs to be a clear night – you may be able to still see them through broken cloud but if you can’t see the stars then you won’t see the northern lights.

Find a dark location away from light pollution from street lights, cars and buildings. The lack of large cities and towns in the Highlands and Islands of Scotland means you won’t have to go far to find your perfect spot.

Not a full moon

A full moon can make the northern lights difficult to see.

Look all around you

Look north but be aware that if there are high levels of geomagnetic activity you should check in all directions. Use a compass to make sure you know where north is. A smartphone normally has a compass.

It takes a bit of dedication to see the Northern Lights. We are not great at staying up late. If there’s been an aurora alert but we can’t stay up any later, we go to bed set our alarm every hour so we (it’s normally down to me!) can check out the window to see if anything is happening. If you get up in the night for the loo or to get a drink, don’t miss the opportunity to look outside.

Choosing accommodation with large windows can help you do this without having to actually go outside in your pyjamas.

Scotland’s winters can be cold. A clear night sky will be ideal for watching the Northern Lights but the temperature will drop even more. Dress in your warmest outdoor clothing including gloves and a hat.

Wrap up warm and take a flask of tea or a hip flask of your favourite single malt (as long as you don’t have to drive!).

Preserve your night vision with a red light torch

The best times to view are generally between 9pm and 12am so be prepared to wait. There will be some incredible night skies and shooting stars to look at while you wait.

It’s worth checking at any time though if it’s dark.

They don’t usually exhibit for long so you need to keep looking. A northern lights display could last only a few minutes. A good display may last for no longer than 15-30 minutes. Displays could continue for several hours if you’re very lucky.

This may sound obvious but if you’ve only seen them in stunning photos, you may not know that they don’t always look like that.

The Northern Lights are created by the Earth’s spectra of gases and the height in the atmosphere where the collision of particles from the sun and the Earth’s gases takes place.

Our naked eye can most easily see the green-yellow part of the spectrum where the sun emits most of it’s light. You’re most likely to see green but the they can also appear white/grey. If you’ve never seen them before and are looking on a cloudy night, you might not be sure what you’re seeing.

We have seen them as wispy grey or white clouds, which can be easy to miss. It was only when they started moving in a strange way, we realised that they were actually the Northern Lights.

Your camera sees more than you can

Our eyes don’t see such bright, vivid colours that are captured by a camera. This means photos of the aurora are normally more impressive than what you will see live. They can also be happening but not visible to the naked eye.

Taking photos can make you miss out

Although everyone would love to capture amazing images of the Northern Lights we suggest that you don’t be too fixated on taking photos, just enjoy watching the magical, shifting ribbons of colour, especially if it’s your first time.

Don’t give up. If you don’t see them the first time, keep on trying. When you do see them it will be worth it!

Places to stay with dark skies

Croft cottage in a Highland glen near Eilean Donan Castle

Watching this short film will give you an idea of the kind of thing that you should look out for when you’re watching the aurora borealis. Remember, that cameras see more vivid colours than your eyes though.

How to photograph the Northern Lights

Taking photographs of the Northern Lights can be tricky but worthwhile because the camera sees the aurora better than the human eye. Check out the guides below which include equipment, camera settings and more and don’t forget to share your photos with us on social media.

Check out our other posts about the Northern Lights in Scotland including: