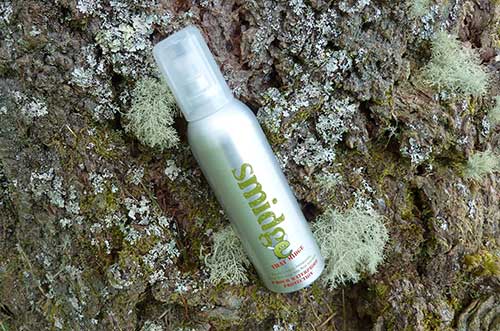 Don’t let the midges in Scotland stop you from enjoying the Scottish Highlands and Islands. Here’s tips on how to prevent midge bites, midge repellent reviews plus how to stop midge bites itching. 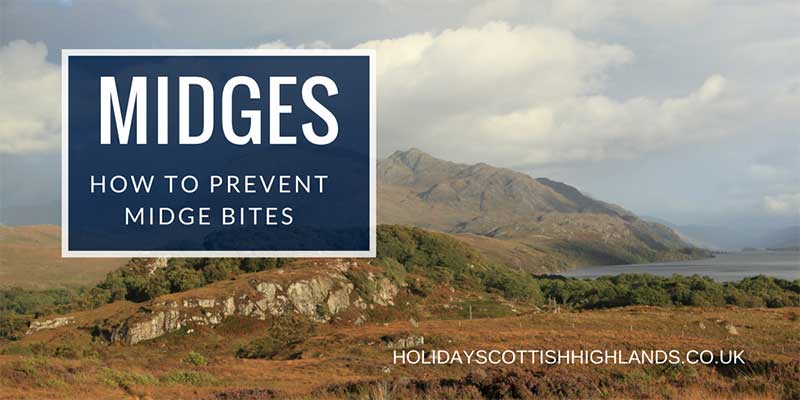 It is worth mentioning that however annoying these pesky Scottish midges can be, they are not such a serious threat to your health as ticks which can give you Lyme disease. Please make sure you read our post about Lyme disease too.

Read: What is Lyme disease & how to avoid tick bites in humans

Midges (also called gnats) are tiny flying insects and the Highland midge (Culicoides Impunctatus) is the one that causes issues, particularly in Western Scotland and the Highlands.

Why do midges bite?

It is only the female midge that bites. When female midges emerge they have built up enough fat reserves as a larva to lay their first batch of eggs. To mature more batches of eggs than this initial batch, the female midge needs a blood meal.

Male Highland midges are vegetarian and eat plant nectar so won’t bother you.

Midges are not the same as mosquitoes

Mosquitoes are sometimes confused with midges but mosquitoes are much larger insects. You may come across mosquitoes in Scotland but there aren’t as many as the midges.

Midge season in Scotland – the best time to avoid

If you want to know when is the best time to visit Scotland to avoid the midges, you need to find out when is the midge season in Scotland.

What month are midges in Scotland?

Adult midges in Scotland start to come out in April and they are active on the wing until October. There are often two peaks in emergence during this period which are the worst time for midges in Scotland so these are the best times to avoid – one in late May/early June and the second in late July/early August.

In saying that we’ve been on holiday in the Scottish Highlands and Islands during these peak midge times and it hasn’t stopped us going back year after year.

How to avoid midge bites

The best method to avoid being bitten in the Highlands is to use a repellent and to recognise the conditions when midges are likely to be most active and avoid going out in them.

If you’re still getting attacked, then bring out the midge net. I always carry my midge hood in my rucksack and wear it over my trusty Tilley hat. Everyone should invest in one of these. They are cheap, small to carry around and so useful, even if you look a bit of an idiot. Midge hoods can be bought in local shops or you can buy them online from:

The bad news is that we have yet to find a midge repellent that works all the time on every occasion. Once on the Isle of Mull, on getting out of the car at a viewpoint we were attacked by midges. We applied insect repellent and the midges disappeared. On our next stop a few miles down the road, the midges weren’t affected at all by the same midge repellent. Maybe certain “groups” of midges in Scotland are unaffected by some products but I’m not a scientist. Scottish Natural Heritage (SNH) say that:

Repellents are effective but not perfect: they will only reduce the numbers of bites.

The good news is that I have found a few insect repellents that do work some of the time on the midges in Scotland.

Midges are repelled by:

We prefer to use insect repellents which don’t contain DEET or DMP. Although DEET and DMP are more effective than non-DEET or  natural insect repellents, they are capable of melting some plastics and that isn’t really something we want to put our skin.

We used this on our last trip to Scotland and found it to be very effective. The active ingredient is Saltidin (also known as Icaridin and Bayrepel) which was developed as a safer alternative to DEET and which smells and feels much more pleasant. Apply it before you get attacked and it should keep the pests away. It has a pleasing fragrance and is like a moisturising milk.

More info and to buy

This is another of our favourites. This “USDA Certified Organic – All Natural Mosquito Repellent” comes in a small metal tin so can easily fit in a pocket or small bag. As you’d expect with a balm, a little goes a long way so it lasts for ages and is another great-smelling natural product.

We haven’t tried Lifesystems Natural 30+ Insect Repellent Spray but I like that it’s another natural insect repellent.

Lifesystems also have a product formulated especially for midges which contains myrtle extract and DEET.

I first bought this from a little natural health shop in Tobermory. This was the first natural insect repellent I ever bought and I was really pleased with the results. As I mentioned before, it didn’t seem to work all the time so I ended up trying some other things too. I do think it’s worth trying though and there are some good reviews.

When researching midges in Scotland, it’s well-reported that Avon Skin So Soft is an effective midge repellent and it’s widely available to buy from Amazon and other online retailers.

Does Marmite keep midges away?

Some people swear by eating marmite to avoid being bitten by midges. There’s no scientific evidence that marmite is an effective midge repellent but if you’re a Marmite fan, you could give it a go.

To stop a midge bite itching, try using a specific bite and sting relief product such as hydrocortisone cream or an antihistamine cream.

Amazon has a range of products to stop midge bites itching which are also effective for relief from other insect bites, such as horse flies and mosquitoes. Although I don’t normally react to midge bites, I do tend to have a bad reaction to mosquito bites and my must-have bite treatment is a bite click relief which I find works really well at reducing swelling and itching.

To stop midge bites being itchy, you could also try herbal and plant remedies such as:

If you get bitten by a midge or a gnat they sometimes look similar to mosquito bites. On my skin, I find that the bites appear as a small red mark. According to the NHS website, they usually cause small, red lumps that can be painful and very itchy. They can sometimes swell up alarmingly and some people may also develop fluid-filled blisters.

Midge bites aren’t usually a serious problem. Midges don’t pass on diseases but they can be irritating as they cause swelling and painful itching.

If you’re being bitten by midges, then your friends and family probably are too. Why not help them out by sharing this post with them using the simple share buttons?

Midges in Scotland – Our advice

Don’t worry too much about the midges in Scotland and don’t let them put you off visiting this beautiful country. Midge bites don’t irritate me as much as mosquito or cleg (horse flies) bites and as midges don’t transmit disease to humans, I’m more relaxed about midges. We generally find it’s too windy for midges most of the time anyway! When you go out and it isn’t that windy, carry a couple of different natural insect repellents and a midge hood and hopefuuly, you should be fine.

What are your best products for repelling midges in Scotland? What’s your advice for avoiding midge bites? Please post in the comments below.