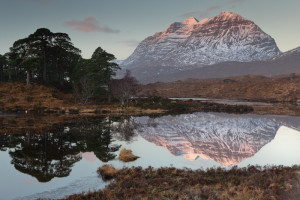 Douglas Griffin is a flow measurement specialist working in the oil & gas industry. Douglas lives in Insch, Aberdeenshire with his wife, Liz,  and their children, Mhairi and Sandy. In his spare time he is a landscape photographer who loves to explore the Scottish Highlands and Islands and Douglas picked up a John Muir Trust ‘Wild Places’ Award in 2015. In the second of our Local Tips series, Douglas shares with us his favourite places in Scotland’s Highlands and Islands and Aberdeenshire along with some of his stunning photos.

How long have you lived here?

We’ve lived in Aberdeenshire for 15 years. Before that we lived in the city of Aberdeen. I am originally from North Lanarkshire in the Central Belt; I met my wife there; she is French and was studying in Glasgow. We moved to the North-East in 1993, when I started working in the oil & gas industry.

It’s really very difficult to single out one. In 2015 I visited Sanna Bay in Ardnamurchan for the first time; it is truly exceptional. The beaches in Sutherland (Achmelvich, Clachtoll, Sandwood Bay, and those on the north coast between Durness and Loch Eriboll) are similarly magnificent. I have a soft spot too for places like Mellon Udrigle and Achnahaird in Wester Ross, because these feature mountain backdrops. The beaches on the Ross of Mull can be quite hard to get to, but they are well worth the effort.

But if I was forced to pick just one, I think it would have to be the sands of Luskentyre and Seilebost, on the west coast of South Harris. It’s a sublime place in every respect; its beauty can almost be too much to take in. Something that all of these beaches have in common is that they are composed of shell sand, which can give the water the most wonderful turquoise colour in certain light.

Again, it’s very difficult to pick out just one. In terms of hillwalks, one that springs immediately to mind is the traverse of An Teallach in Wester Ross, which for me is the finest mountain in Scotland.  It has everything – the mountain itself is a stunning piece of rock architecture, while its setting, on the northern boundaries of the Fisherfield wilderness and with views out over the Minch to Uist and Harris, is magnificent.

This is a fairly strenuous outing, however. In terms of shorter walks, I would recommend one of the trails in the restored Caledonian pinewood above Loch Maree – the Coille na Glas Leitir, in the Beinn Eighe National Nature Reserve.  This is a stunningly beautiful woodland, with ancient trees and superb views across the loch to Slioch.

Most special time of year

While autumn and winter are the best times for landscape photography, the cold weather and especially the long hours of darkness that we get in Aberdeenshire can make it something of an ordeal. So I would have to say springtime – I love the feeling of renewal; the lengthening days, and the prospect of those very early mid-summer sunrise shoots that are one of the highlights of the year from me. (This one was taken at 4am on a May morning.)

Well, this is perhaps an unusual suggestion, but in Aberdeenshire I think that everyone should take the time to visit some of the ancient Pictish carved stones. I think that these deserve to be much better known than they are (I have a small section on my website that gives more information).

These are to be found all over Scotland north of the Forth, from Shetland to the Western Isles, but they reach their highest concentration in the north-east. So I’d suggest that visitors with an interest in history go to see The Craw Stane at Rhyie, or the Maiden Stone at Pitcaple.

Failing that, there’s always the distilleries…

Undoubtedly at Loch a’ Chroisg in Wester Ross, in 2010. I had stopped at the side of the road to make the short walk to the loch, intending to photograph a ‘family’ of Scots pine trees.

As I jumped over a dry-stone wall I was absolutely stunned to see a white-tailed eagle sat on one of the pine trees, no more than 20m away. By the time I had got the camera out it was long gone, but it was an unforgettable moment.

Read: 11 things to take wildlife watching – the gear you need

One that really stands out is the road from Drumrunie on the A835 (N of Ullapool) through Inverpolly as far as Achnahaird in Coigach (see below re. Achnahaird).  Then, on the return, turning N at Badnagyle on the unmarked road N to Lochinver, past Druim Bad’ a Ghaill – you can actually just make out the road on this photo.

Why? – well, quite simply I think it’s the most spectacular road in Scotland. I’ve driven it far more times than I can remember and it never ceases to take my breath away.

Another almost impossible question! The one I’ve photographed most is that at Loch Clair in Glen Torridon. I’ve stood at this place at dawn on probably 20 occasions, and I never tire of it. This was where I took the photo that picked up a John Muir Trust ‘Wild Places’ Award in 2015.

However, if I had to choose just one view, it would have to be that at Achnahaird. The skyline to the east from here is the finest in Scotland, in my opinion. All the way from Quinag and Suilven to the north, past the Inverpolly hills and as far as An Teallach to the south, with the machair and shell-sand beach of Achnahaird Bay in the foreground. Some of the finest moments of my life have been spent here, watching the light change as the sun dips towards the western horizon.

Favourite place to eat and drink

Well, my favourite food is undoubtedly Italian but when I am in the Highlands & Islands, I always make a point of trying to eat at places serving traditional food using local, fresh produce. Fortunately, these are now fairly widespread. One that I’ve been going to for years and never been disappointed in is the Shieldaig Bar & Coastal Kitchen, at Shieldaig in Upper Loch Torridon. (This one has the added bonus of being very handy for viewing white-tailed eagles, which regularly nest on Shieldaig Island, which is just across the water.)

I don’t eat pies as a rule, but I nearly always make an exception for the Lochinver Larder. I’ve been known to make a 45-minute detour from Ullapool just for the sake of their venison & cranberry offerings. Further north, The Cocoa Mountain in Durness is a must for their hot chocolate.

Thanks, Douglas, for taking the time to share your top tips and also your beautiful photography. We agree that Achnahaird beach is amazing and actually featured it in Scottish beaches: Highlands and Islands. Last year we discovered Lochinver Larder and can confirm these are the best pies we’ve ever had (and we do like to eat pies) so can understand why Douglas is so tempted to make that detour.